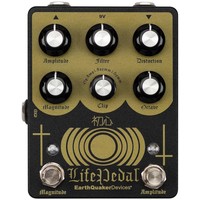 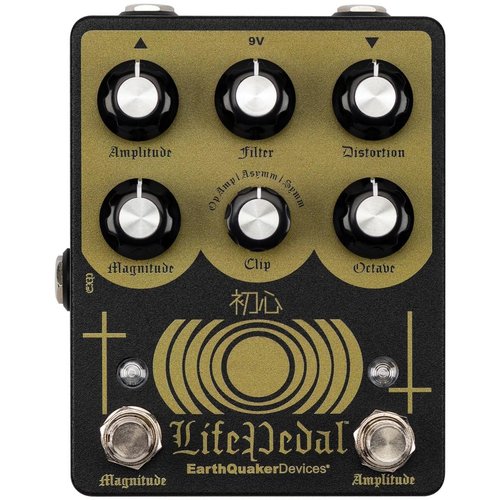 Sunn O))) and EarthQuaker Devices are pleased to bring you the compact, pedalboard-friendly version of the Life Pedal distortion. This is the same exact circuit as the WILDLY popular ultra-limited run version that was released in early 2019 but with the addition of expression pedal control over the octave blend and Flexi-Switch Technology on the relay-based true bypass footswitches.

Life Pedal is a distortion with a blendable analog octave up and a booster combined in one compact package. The “Amplitude” side is faithfully modelled after the classic “White Face” distortion unit, right down to the LM308 IC and tantalum caps. The only modifications made to the original circuit are in the clipping section. The traditional circuit uses a single pair of silicon diodes for a tight, compressed crunch. The Life Pedal introduces two additional clipping options to better adapt to different rigs. The first position is no diodes to allow for full, grinding Op Amp assault at maximum volume. The second position utilizes two silicon diodes and one LED in an asymmetrical clipping configuration. This delivers a slightly compressed and smooth crunch, similar to a valve amplifier. The last position is the stock double silicon diode configuration which provides that classic tone you know and love.

The Octave in Life Pedal is an all-discrete, analog full-wave rectifier circuit built around a pair of Russian Germanium diodes. Located at the input of the circuit, the Octave control slowly blends in the octave effects as you turn it clockwise. This feature can also be used via expression control allowing for wild, hands-free octave swells mid-riff. Because this is an analog octave effect, it is monophonic and works best playing single notes above the twelfth fret while using the neck pickup. Playing chords with the analog octave will sound clanging and chaotic. Using the bridge pickup and playing below the twelfth fret will produce a very subtle octave effect. Going full Octave transforms Life Pedal from a simple distortion device into a swelling, raging fuzz similar to the classic Super Fuzz!