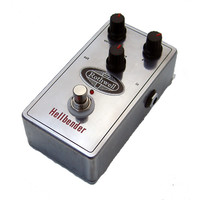 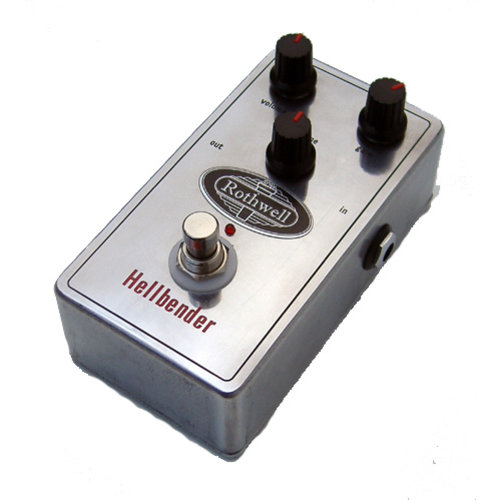 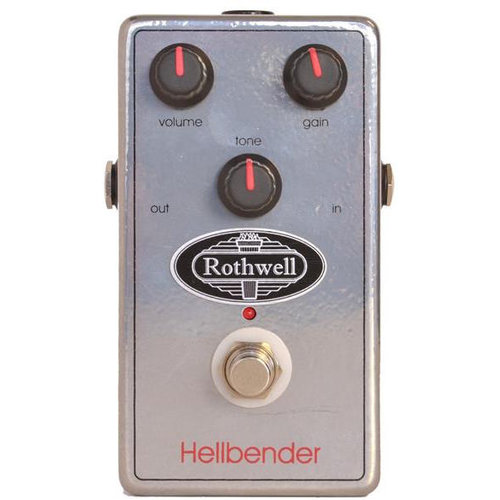 The Hellbender is a high quality guitar overdrive pedal, designed and hand made in the UK to give guitarists a touch responsive and dynamic distortion effect which will range from a very mild and subtle overdrive to a rich, saturated, singing lead tone. Unlike most distortion pedals available today the Hellbender uses more than one stage of distortion and more than one distortion mechanism. This gives a more realistic emulation of valve amp being driven hard. As you pick harder the different distortion mechanisms come into play to give your playing a much more responsive sound. The Hellbender is also capable of higher output than many other distortion pedals (up to 3.6 volts pk-pk) and even with the gain set to its lowest level where the sound is almost totally clean a healthy volume boost is achievable. The Hellbender is not a digital model of anything, nor does it claim to recreate the sound of any particular vintage or modern amp, and isn't designed to be used for recording direct into a mixer or computer. This overdrive is intended for use the old fashioned way - between a guitar and amp, either on stage or mic'd up in a studio. The guitar, pedal and amplifier should work in synergy to allow you to create your own sound. Any good guitarist's signature sound comes not only from their equipment but from their particular approach to picking, pick attack, pick angle, vibrato etc. The Hellbender will allow these playing subtleties to come through, enhancing the overall sound and becoming an integral part of the guitar/pedal/amp combination. (Beware of pedals which claim to sound like, for example, a 1969 Marshall, regardless of the amp it is fed into.)

At high gain settings the distortion available makes singing lead tones with enhanced sustain possible. The volume control can be set so that it lifts the output level to push an already distorted amp into very high gain territory. This combination of pedal distortion, signal boost and amp distortion can be balanced to create the right blend of saturation and dynamics. The Hellbender features true bypass switching. This leaves the guitar completely isolated from the circuit when the unit is bypassed so that your raw guitar tone is not affected in any way.